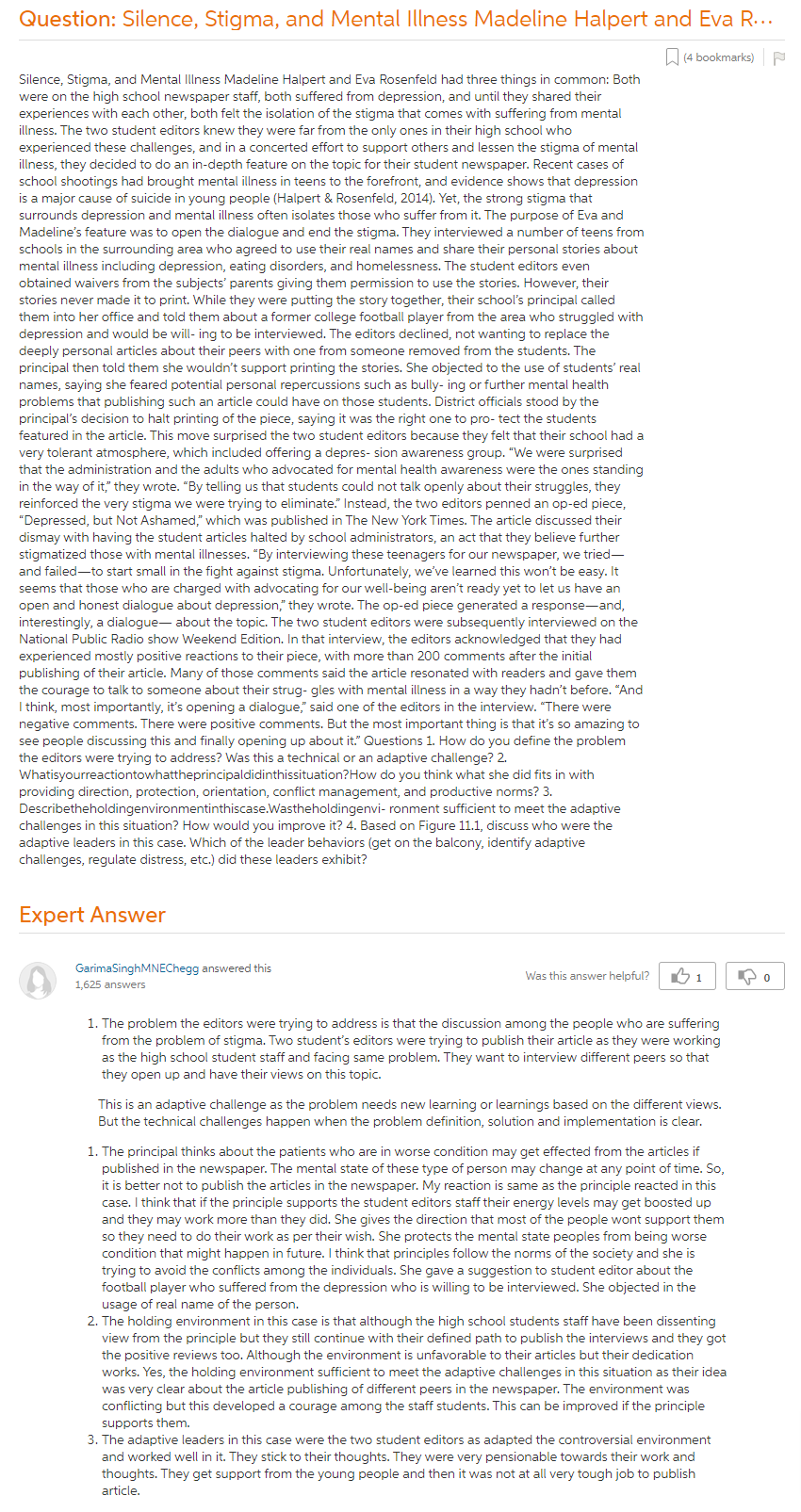 Silence, Stigma, and Mental Illness Madeline Halpert and Eva Rosenfeld had three things in common: Both
were on the high school newspaper staff, both suffered from depression, and until they shared their
experiences with each other, both felt the isolation of the stigma that comes with suffering from mental
illness. The two student editors knew they were far from the only ones in their high school who
experienced these challenges, and in a concerted effort to support others and lessen the stigma of mental
illness, they decided to do an in-depth feature on the topic for their student newspaper. Recent cases of
school shootings had brought mental illness in teens to the forefront, and evidence shows that depression
is a major cause of suicide in young people (Halpert & Rosenfeld, 2014), Yet, the strong stigma that
surrounds depression and mental illness often isolates those who suffer from it. The purpose of Eva and
Madeline’s feature was to open the dialogue and end the stigma. They interviewed a number of teens from
schools in the surrounding area who agreed to use their real names and share their personal stories about
mental illness including depression, eating disorders, and homelessness. The student editors even
‘obtained waivers from the subjects’ parents giving them permission to use the stories. However, their
stories never made it to print. While they were putting the story together, their schoo!’s principal called
‘them into her office and told them about a former college football player from the area who struggled with
depression and would be will- ing to be interviewed. The editors declined, not wanting to replace the
deeply personal articles about their peers with one from someone removed from the students. The
principal then told them she wouldn’t support printing the stories. She objected to the use of students’ real
names, saying she feared potential personal repercussions such as bully- ing or further mental health
problems that publishing such an article could have on those students. District officials stood by the
principal’s decision to halt printing of the piece, saying it was the right one to pro- tect the students
featured in the article. This move surprised the two student editors because they felt that their school had a
very tolerant atmosphere, which included offering a depres- sion awareness group. “We were surprised
that the administration and the adults who advocated for mental health awareness were the ones standing
in the way of it” they wrote. “By telling us that students could not talk openly about their struggles, they
reinforced the very stigma we were trying to eliminate” Instead, the two editors penned an op-ed piece,
“Depressed, but Not Ashamed,” which was published in The New York Times. The article discussed their
dismay with having the student articles halted by school administrators, an act that they believe further
stigmatized those with mental illnesses. “By interviewing these teenagers for our newspaper, we tried—
and failed—to start small in the fight against stigma. Unfortunately, we’ve learned this won’t be easy. It
seems that those who are charged with advocating for our well-being aren’t ready yet to let us have an
‘open and honest dialogue about depression,” they wrote. The op-ed piece generated a response—and,
interestingly, a dialogue— about the topic. The two student editors were subsequently interviewed on the
National Public Radio show Weekend Edition. In that interview, the editors acknowledged that they had
experienced mostly positive reactions to their piece, with more than 200 comments after the initial
publishing of their article, Many of those comments said the article resonated with readers and gave them
the courage to talk to someone about their strug- gles with mental illness in a way they hadn’t before, “And
| think, most importantiy, i’s opening a dialogue’ said one of the editors in the interview. “There were
negative comments. There were positive comments. But the most important thing is that it’s so amazing to
see people discussing this and finally opening up about it” Questions 1. How do you define the problem
the editors were trying to address? Was this a technical or an adaptive challenge? 2.
Whatisyourreactiontowhattheprincipaldidinthissituation?How do you think what she did fits in with
providing direction, protection, orientation, conflict management, and productive norms? 3.
Describetheholdingenvironmentinthiscase. Wastheholdingenvi- ronment sufficient to meet the adaptive
challenges in this situation? How would you improve it? 4. Based on Figure 11.1, discuss who were the
adaptive leaders in this case. Which of the leader behaviors (get on the balcony, identify adaptive
challenges, regulate distress, etc.) did these leaders exhibit?

1, The problem the editors were trying to address is that the discussion among the people who are suffering
from the problem of stigma. Two student’s editors were trying to publish their article as they were working
as the high school student staff and facing same problem. They want to interview different peers so that
they open up and have their views on this topic.

This is an adaptive challenge as the problem needs new learning or learnings based on the different views.
But the technical challenges happen when the problem definition, solution and implementation is clear.

1, The principal thinks about the patients who are in worse condition may get effected from the articles if,
published in the newspaper. The mental state of these type of person may change at any point of time. So,
itis better not to publish the articles in the newspaper. My reaction is same as the principle reacted in this
case. | think that if the principle supports the student editors staff their energy levels may get boosted up
and they may work more than they did. She gives the direction that most of the people wont support them
so they need to do their work as per their wish. She protects the mental state peoples from being worse
condition that might happen in future. | think that principles follow the norms of the society and she is
‘trying to avoid the conflicts among the individuals. She gave a suggestion to student editor about the
football player who suffered from the depression who is willing to be interviewed. She objected in the
usage of real name of the person,

2. The holding environment in this case is that although the high school students staff have been dissenting
view from the principle but they still continue with their defined path to publish the interviews and they got
the positive reviews too. Although the environment is unfavorable to their articles but their dedication
works, Yes, the holding environment sufficient to meet the adaptive challenges in this situation as their idea
‘was very clear about the article publishing of different peers in the newspaper. The environment was
conflicting but this developed a courage among the staff students. This can be improved if the principle
supports them.

3. The adaptive leaders in this case were the two student editors as adapted the controversial environment
and worked well in it. They stick to their thoughts. They were very pensionable towards their work and
thoughts. They get support from the young people and then it was not at all very tough job to publish
article,

Answerie.com is a free website for study. Get Free Chegg Answers 2022. Please send us a mail or contact us if you have any suggestion or complain.